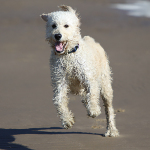 Wales is blessed with the Welsh Coastal Path. Opened in 2012 the path is the world’s first uninterrupted route along a national coast. The path shows off our beaches, estuaries, cliffs, woodlands and hills, There are also city waterfronts, writers’ retreats, fun-parks and historic castles.

There’s 870 miles of coast path to explore. I don’t expect you to walk it all in one go but one day I plan to do just that!

Many of the beaches along south Wales’ coastline are dog friendly year round, although some are just dog friendly during the ‘winter months. I’ve put together a list of those I could find that do allow doggies on. If you know of any others please let me know so I can update this page:

Whitesands and Tenby North and Harbour have a total ban on dogs in the summer.