A recent poll, commissioned by Vamoosh, revealed that 68% of Brits who currently have children living at home, have let their children cuddle up in their dog’s bed, despite dog beds being one of the top 10 most germ-infested household items – they are dirtier than a toilet seat!

Along with this, a whopping 63% of the 1000 people surveyed say they don’t wash their dog’s bedding at the recommended frequency of once a week, and even more shockingly, 1 in 20 people admit to NEVER washing their dog bedding in the washing machine.

Over a quarter of Brits (27%) say they don’t wash their dog bed as often as they should due to it ‘not being dirty’ but Dr. Kelly Reynolds, Associate Professor of Environmental Health at the University of Arizona found that dog beds are one of the top 10 germiest spots in the house due to the hundreds of germs, MRSA and fecal matter that they can harbour.

Added to all the dirt, pollen and dead skin cells, it’s unsurprising that pet bedding is a breeding ground for germs. Reynolds therefore recommends that we remove the cover from our dog’s bedding once a week and wash it in hot water, followed by drying it on a high heat. 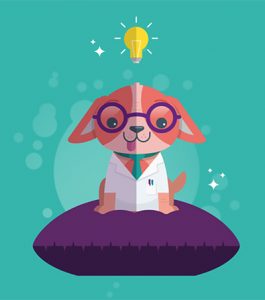 However, the actual task of washing dog bedding is one of those jobs that seems to fall to the bottom of the chores list, as 20% of Brits say that washing the dog bed is low priority, but should it be? Studies have found that there are many different dangerous bacteria, bugs and fungi living in a dog’s bed, in some cases there could even be salmonella, ringworm, listeria and MRSA in there.

A total of 35% of people say they are put off from washing the dog bedding due to the hair getting left in the washing machine and tumble dryer. Dave Toms, scientist and inventor of Vamoosh says “Most dog owners would agree that washing the dog bedding is a hassle because the current methods are laborious and time-consuming due to the hair that remains in the washing machine and tumble dryer. It’s no surprise therefore that many people put off washing their dog bedding.”

13% of Brits think that the dog bed takes 1 month to become unhygienic, but when you think about the amount of exploring dogs do when they’re out and about, they will collect a lot of bacteria and germs, which can spread quickly.