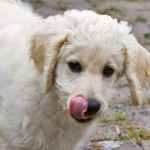 I’ve read a lot online about some pet food being harmful to me and I must admit at first I was a little nervous. There was a particularly nasty piece in the Daily Mail recently of all places!

We’ve all heard the numerous horror stories over the last few years and learned about all the potentially dangerous ingredients used by some dog food manufacturers. It’s not just E-numbers and chemicals but other unnatural, unnecessary and downright poisonous ingredients that should never have come near anyone’s food in the first place.

The good news is that dog owners all over the world have started looking into alternatives to commercial dog foods.

One popular alternative is the raw food diet.

Now whilst my own diet isn’t 100% raw I do have a fairly varied and hopefully nutritious diet. I can certainly recommend raw food though because whenever I get a raw egg I just ‘wolf’ it down (lol). And cow ears and pig trotters are great too! In fact I’ll eat almost anything, but then I’m not really a fussy eater, a bit like my daddy.

Maybe that’s not what I’d eat if I went wild like in that film about a zebra and a lion set on that island off the coast of southern Africa but it is a pretty balanced diet.

Just remember ‘kibble’ (as dog food today is called) wasn’t around 14,000 years ago when my ancestors decided to fetch a stick back that some human threw away and in those days we doggies just ate raw meat. It probably takes many thousands of years for a mammal’s physiology to change sufficiently enough to adapt to a new diet so raw makes sense biologically too.

Now, I’m not saying I won’t pinch a biscuit  or a pizza crust that gets left lying about but my big, strong teeth were designed for meat. My saliva contains an enzyme called lysozyme that destroys harmful bacteria present on raw meat and so once again it’s easy to see why going ‘raw’ can be so good for me. Think about it anyway.

Raw means raw. It doesn’t mean you can give cooked meat to me and expect my digestive system to cope the same way. For example, a raw chicken (bones and all) is fine but don’t give me cooked chicken bones as they can splinter.